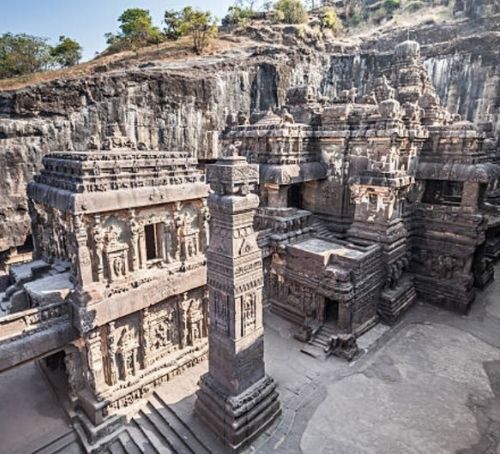 The mighty Shiva, the Creator, the almighty, and the one true God – Lord Shiva has many names to be addressed. But no one can deny the power of Lord Shiva. It is often said that his real followers are blessed with great knowledge and courage.

In the name of Lord Shiva, a lot of temples have been constructed in the past 1000 years, so that his devotees can pray to him. Devotees go to these temples in the number of thousands to pray to the ‘Shiva Linga.’ One of these many temples is the Kailash Temple at Ellora.

But this is not just an ordinary temple. A lot of secrets and myths have been associated with it.

Story Behind Kailash Temple At Ellora

This temple is one of the largest rock-cut Hindu temples in India. Such is the architecture of this temple that even modern-day technology can’t build a structure like this.

It is one of the 34 cave temples that make the Ellora Caves. The construction of Kailash Temple dates back to the eighth century in the reign of Rashtrakura king Krishna I.

Few inscriptions on the walls of this temple provide evidence that a Rashtrakuta ruler commissioned the construction of this temple.

Carved out of a single rock, this temple is one of the biggest wonders of ancient architecture and attracts several tourists every year from around the world.

It is said that King Krishna suffered from a severe disease, and his queen prayed to Lord Shiva and vowed to construct a temple if her wish was granted. When the king healed from his illness, the construction of the temple was commissioned, and one of the most impressive and beautiful temples in the world was built. It is believed that this temple took 150 years to be completed.

But why is this temple so mysterious? What are some unknown facts about this temple? Let’s see.

The Mystery of Kailash Temple At Ellora

It looks like Alien Technology was used to build this temple. But if humans have made it, So our ancestors must have advanced technology even today.

All these points come together to create a jaw-dropping mystery around this temple.

Nevertheless, this temple is the most beautiful example of ancient Hindu architecture and rock carvings. Thousands of people every year visit Ellora Caves to feel that legacy and enjoy its beauty.